Chipping Norton is a small town in northern Oxfordshire, situated on the edge of the Cotswolds Area of Outstanding Natural Beauty. At just over 200m above sea level, it is the highest town in the county, built on a limestone plateau, on a rock formation named after the town itself; the Chipping Norton Limestone. A small brook runs through the town, and over thousands of years has carved a deep valley that slopes down to the south of Chipping Norton, and cuts through the sequence of rocks that underlie this area of Oxfordshire. Chipping Norton is a great place to see how the Cotswold landscape is dictated by the geology. The Cotswold building stones themselves even tell a fascinating story of the area's rich Earth Heritage. 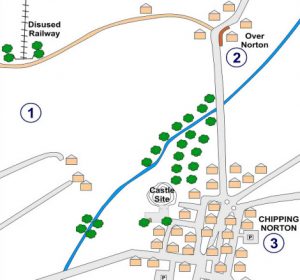 The Clypeus Grit can be found along this stretch of the trail. The Clypeus Grit is a type of limestone that formed around 170 million years ago in Middle Jurassic times. It is particularly interesting because it contains lots of fossil sea urchins, or echinoids, of the species Clypeus ploti.

Some things to look out for if you find a Clypeus.

Clypeus fossils were often called ‘pound-stones’ because in the past they could be used as a measure of weight because of their very regular size and mass.

It is possible to see some blocks of Marlstone Rock Formation in the wall in Over Norton. The Marlstone is also known as the Hornton Stone or the Banbury Ironstone, and can be seen in many of the buildings in Northern Oxfordshire. 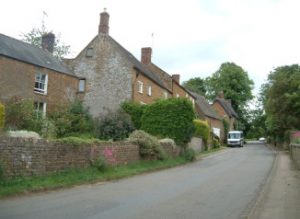 The Marlstone is an iron-rich limestone that formed on the floor of a shallow sea that covered the area in Early Jurassic times, around 190 million years ago. The red colour of the stone is caused by the iron in the rock rusting.

As well as being an important building stone, the Marlstone is also an important mineral resource for northern Oxfordshire. It was realised in the mid 1800s that the Marlstone could be extracted for iron ore, and iron workings opened up all over northern Oxfordshire, in particular villages that were along the Banbury to Cheltenham Direct Railway Line, such as Hook Norton, Adderbury, Bloxham and Kings Sutton. The old railway line is passed along the Chipping Norton Trail, just past Location 3. Using the railway, the iron ore was exported to markets in Wales and the Midlands where it could be used to make steel. 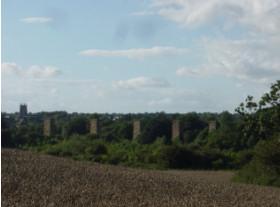 Chipping Norton is the highest town in Oxfordshire, and sits on top of a Cotswold limestone plateau, just over 200m above sea level. Chipping Norton, and the whole of the Cotswold area, has been hugely influenced by the band of Middle Jurassic limestone that underlies this whole area. This limestone band runs up through the country from the south-east to the north-west, forming the famous Jurassic coast in Dorset, the Cotswolds in central England, and the Cleveland Hills in Yorkshire.

This Middle Jurassic limestone formed on the floor of a shallow, tropical sea from around 180 to 165 million years ago. During this time, England was further south, nearer to the equator, and Oxfordshire would have been more like the Bahamas today. The limestone contains fossils of the creatures that lived on this Jurassic seafloor, such as shellfish, corals and sea urchin shells and spines.

As well as being geologically interesting, this local limestone has been a hugely important resource for the area. It has been quarried for building stone, and provides the Cotswold area with the very characteristic honey-coloured cottages and buildings. The limestone is still being quarried today, although this is now mostly for aggregate rather than building stone.