Burford is a small Cotswold town that lies in the valley of the River Windrush. The High Street descends steeply from the Jurassic limestone ridge down to the river, which flows through the winding gorges carved in the Jurassic limestone plateau. The steep sided valleys in the area have facilitated quarrying, and for centuries this was one of the principal industries in the area. The stone was quarried for building stone, and provides Burford, and many Cotswold towns and villages, with its characteristic, honey-coloured stone cottages and buildings. There are still quarries working in the Burford area today, but these now mostly quarry the limestone and crush it for aggregate. The Windrush and its tributaries have had a major impact on the landscape, and have shaped and carved the area into the attractive hills and valleys that are so characteristic of the Cotswolds. 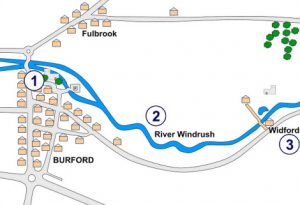 The Taynton Stone is a particularly excellent building stone, and has been described as the “best building-stone of the Oxford district” (Arkell, 1947). It has been used as a building stone across the Cotswolds, as well as much further afield, and can be seen in many of the buildings in Burford. The Taynton Stone is a hard limestone that formed in Middle Jurassic times, around 167 million years ago. At this time, the sea had spread across the land, and Burford was submerged under a warm, tropical sea. Fossils of the animals that lived on this seafloor have been preserved in the Taynton Stone, and include oysters, brachiopod shellfish and coral fossils.

The stone varies considerably along its length, which also means that it varies in quality. Although it was quarried extensively all around the Burford area in the past, it’s thought that the best quality stone came from a quarry in Taynton, a small village two miles north-west of Burford.

Taynton Quarry closed down at the end of the 1990s, but it has an impressive history. Stone extracted from the site was used in many great buildings, such as St Paul’s Cathedral, Windsor Castle, and many of the University buildings in Oxford, such as the New Bodleian Library, Merton College and Christ Church.

The Taynton Stone is used in the upper stage of the Radcliffe Camera in Oxford.

The Windrush Valley is an excellent place to see examples of the effects of the Ice Age on Oxfordshire. The Ice Age was a period of time that lasted between 2 million and 10,000 years ago. It was a time of very variable climates, when the climate altered between cold phases, called glacials, and warm phases, called interglacials. The last glacial phase ended around 10,000 years ago, and we are currently in the following interglacial, so it is likely that we are still in the Ice Age!

The Ice Age had a huge impact on Oxfordshire. It had major effects on the county’s rivers, and the sediments that the rivers deposited in the Ice Age can today provide us with much information on what the area would have been like.

During the Glacial phases, much of the country was covered with ice, snow and glaciers. It is not thought that the ice sheets reached as far south as Oxfordshire, but the county would still have been subjected to periglacial conditions. The soil would have been frozen, so not many things could grow here. Oxfordshire would have been home to animals such as the Woolly Mammoth, the Woolly Rhino and bison.

Mammoths were common in Oxfordshire. Artwork by David M. Waterhouse.

During the interglacial phases, the climate was more similar to today. During these warmer times, Oxfordshire was home to animals such as the Straight-Tusked Elephant, hippos and lions. Several hand-aces have also been found in Oxfordshire, suggesting that early humans may also have lived here too.

Lions lived in the Ice Age!

Evidence for the much larger-scale Ice-Age rivers can be seen just a few miles east of Burford, at Asthall. There is a small hill, 120m above sea level, to the south-east of Asthall village. The hill is the core of an ancient meander of the River Windrush. In the Ice Age, the river would have meandered around the area where Asthall is now, cutting down into the limestone plateau.

The meander became so tight that eventually the river broke through. An oxbow lake would have been left in the old meander, which slowly dried up.

Today the Windrush is much narrower, and flows through the wide ‘misfit’ valley that it carved out in the Ice Age. The evidence of the ancient meander is the isolated hill near to Asthall village. An excellent viewpoint of the meander can be seen from the picnic site off the B4047, just south of Asthall.