Oxford is famous for it's 'dreaming spires', colleges and architecture, but it is the underlying geology of the area that tells a fascinating history going back millions of years through time, and has helped to make Oxford into the city that it is today. Oxford is partly built on the remains of a coral reef that flourished 155 million years ago in a tropical sea that covered the area. Evidence for Oxford's tropical past can be seen all over the city, from old quarries in Headington, to the building stones used in many of the city's buildings and colleges. The city centre also displays geology from much further afield than Oxfordshire. There is even plenty of evidence around the city for the Jurassic creatures that once lived here. 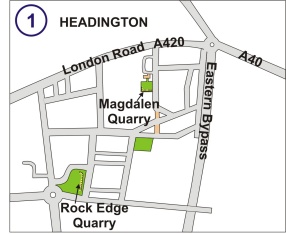 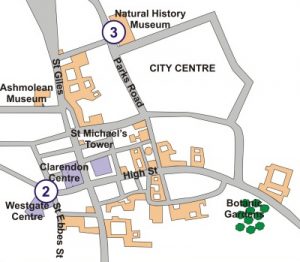 Around 160 million years ago, in the Late Jurassic, Britain lay further south, and was submerged under a warm sub-tropical sea. These tropical conditions were just right for coral reefs to flourish. When the corals died, they became buried under successive layers of debris and sediment, and after millions of years became fossilised. They formed the Corallian Limestone that now underlies this area of Oxford.

The Corallian limestone has been quarried extensively in Headington. A type of limestone called Coral Rag was the commonest stone for building in mediaeval Oxford and can still be seen in the City Wall and St Michael’s Tower. These walls, built even as long ago as the 11th century, are still unweathered and almost as good as new. By the end of the fourteenth century, however, the founders of nearly all the colleges were using a different type of Corallian Limestone, called the Headington Hardstone and Freestone. This rock was very useful to builders because it can be cut in any direction, and can therefore be carved. The earliest stone to be quarried appears to have been the best quality and seems almost indestructible, being reused from old buildings. Headington stone was also exported further afield, and was used for building Eton College and Windsor Castle. Early in the eighteenth century, however, the good veins of Hardstone seem to have run out and Headington began to supply a very inferior product, which has had to be replaced at great expense. The Radcliffe Camera is an example of a building where the Headington stone is generally in poor condition. 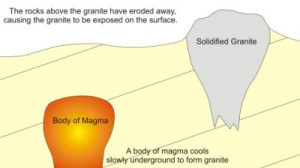 An example of how granite forms.

Because these rocks form underground, the magma cools much more slowly than if it had been erupted from a volcano. The slow cooling time gives the crystals a longer time to grow, and this means that the crystals in granite are relatively large. It is possible to see three different minerals in the granite. The pink or white crystals are feldspar, the clear crystals are quartz, and the black crystals are biotite mica. 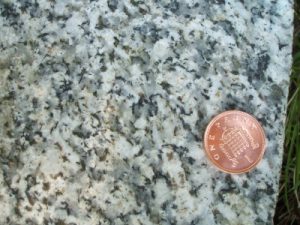 On the grassed area outside the Natural History Museum is a dinosaur footprint trackway made from casts taken from Ardley Quarry in North Oxfordshire. Ardley Quarry has revealed a total of 42 more-or-less continuous trackways in the Jurassic limestone on the quarry floor. This is the largest dinosaur trackway site to have been discovered in the UK, and also appears to contain some of the longest dinosaur trackways in the world. 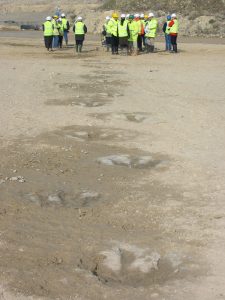 The casts outside the Museum are thought to have been made by Megalosaurus, who at 7m long and weighing about a ton, was one of the largest predators in the Jurassic. Footprints from another dinosaur, Cetiosaurus, are also present at Ardley Quarry. Cetiosaurus was a sauropod, would have been about 15m long and would have weighed up to 27 tons. The Megalosaurus footprints are particularly important because they show that the dinosaur used different hind-limb postures when walking and running.

Lots of behavioural information can also be interpreted from the footprints, and it has been suggested that Cetiosaurus moved in herds, and that Megalosaurus could have hunted in packs.