The ancient market town of Faringdon is situated on the Golden Ridge, which extends between Oxford and Swindon. It is the warm, honey coloured grit used in the buildings in the area, including many of the buildings in Faringdon, that gives the Golden Ridge its name. The Ridge is made of coral-rich limestone, called the Corallian Limestone, which plays a big part in the geology of Faringdon, ranging from its affect on the landscape, to its use as a building stone. Faringdon is also home to the world-famous Faringdon Sponge Gravel, which contains many excellently preserved fossil sponges. Faringdon is one of the best places in Oxfordshire to see how the geology affects the landscape, and this provides the town with some of the best views in the county. 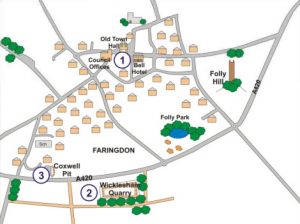 Council buildings – the lower metre of stonework on the council buildings is made of a fossil shingle bed that is most likely to have been derived from the Faringdon Sponge Gravels. Looking closely you can see that it is made of lots of tiny fragments of fossils, such as shells. There are some fossil fragments that are light in colour and have a very porous texture, and these are fragments of fossil sponge, as indicated by the spongy texture.

The Bell Hotel – Many of Faringdon’s buildings were destroyed in the Civil War, but the Bell is thought to be pre-Civil War in age, which means it is probably one of the town’s oldest buildings. The stones in the wall are mainly local coral-rich limestone, but because this limestone is such a poor building stone, wooden lintels are used above the windows, and a type of rock called freestone is used around the windows. Freestone is not local to Faringdon, but it makes a good building stone because it can be cut in any direction and has a smooth finish, unlike the rubbly local limestone.

The Old Town Hall – Looking closely at the pillars, you can see that there are lineations in the rock that diagonally cross each other. This is cross-bedding, and it is preserved ripples that formed on the seafloor by the gentle action of currents, just like the ripples that form on the beach today. 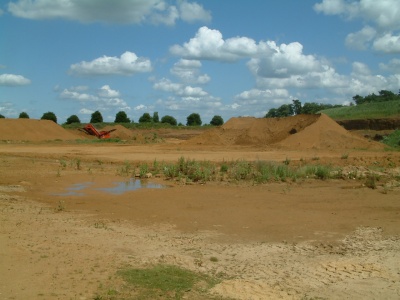 Wicklesham Quarry is extracting a type of rock called the Faringdon Sponge Gravel, which formed in the Cretaceous around 115 million years ago. The Sponge Gravel makes excellent building sand and is used for gravel paths. There used to be several quarries in Faringdon that were extracting the Gravel, but Wicklesham Quarry is now the only active quarry. 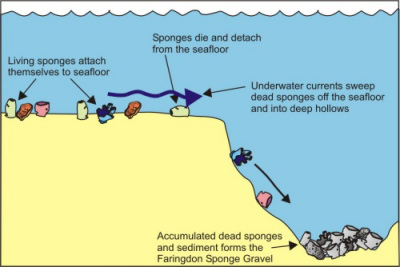 The Sponge Gravel is part of a type of rock called the Lower Greensand, and it consists of fossils and fossil fragments set in a sandy matrix. Most of the fossils are sponges, but other common fossils include shellfish, sea urchins and their spines, and bullet-like belemnites.

The Sponge Gravel formed around 115 million years ago, when the area was submerged under the sea. Sponges lived on the sea floor, but when they died they became detached from the sea-floor, and underwater currents swept them into deep hollows where they accumulated, and after millions of years became fossilized to form the sponge gravel. 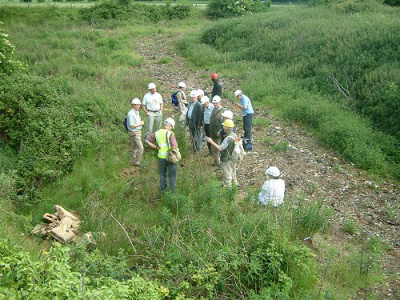 The ideas behind this project were developed over the past four years from discussion between members of OGT and various community and local groups throughout Oxfordshire. Time and again we were asked why something couldn’t be done about the state of a local disused quarry called Coxwell Pit and why were important heritage sites being ignored.

The answer was an incredibly simple compromise. OGT brokered a deal between the landowner and developer of the site, Builders Ede Ltd, which resulted in the planned housing being built on the site whilst part of the site was gifted to the local community along with £20,000 worth of landscaping. It is hoped that the site will become a green space almost in the centre of the town where local people will be able to go and appreciate their unique local geology and Earth Heritage. It will also be a safe outdoor laboratory and resource for local schools. The Faringdon Fossil Trust is being set up so that local people will have a say in how the site is managed.

So why is the Coxwell Pit so important?

The quarry exposes a rock unit called Faringdon Sponge Gravels. These rocks and fossils are unique to Faringdon, and are known by geologists all over the world. The site has been designated as a SSSI (Site of Special Scientific Interest) and as a RIGS. But the site was under threat both from fly tipping and from development.

The rocks are around 115 million years old (Cretaceous period) and were deposited in a valley in the sea floor during a storm. The rocks contain a number of superbly preserved fossils including the famous sponges which are lovely called Harry and Fred by the members of OGT. There are also lots of other sea animals preserved including ammonites, echinoids (sea urchins), brachiopods and bryozoa. Some Jurassic dinosaur and plesiosaur remains have also be found at Coxwell Pit. These would have been derived from the older Jurassic sediments probably also as a result of the storms. Many of the fossils found at Coxwell Pit are so rare that they are named after the quarry and the local town. This project was funded by the Aggregate Levy Sustainability Fund. 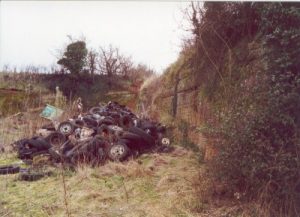 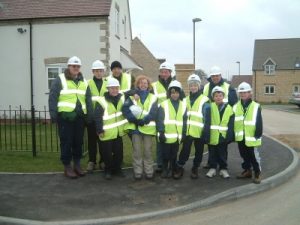 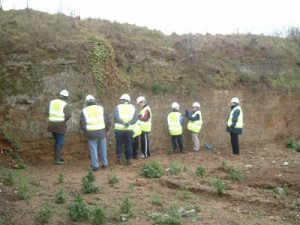 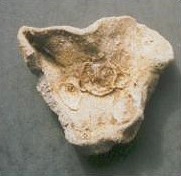 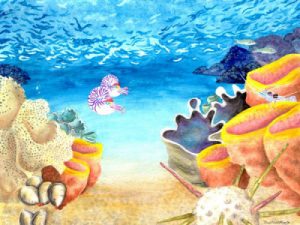